Petition for a leash free Dog Park at Goodrich Park

Some people in our neighbourhood are circulating a petition for a leash free dog park to be located at the current Goodrich Uniroyal Park. This park is on Guelph Street, right next to the train tracks half way between Waterloo Street and Weber Street West.

The park is slightly hidden because you have to take a path up a hill to get to it, and it is not used a great deal. It is clearly marked with a sign if you'd like to investigate.

To sign the petition (or object to the idea) send an email to "denis@denispellerin.ca".
Posted by mhbpna at 4:50 PM No comments: Links to this post

On Weber Street between Louisa and Wilhelm Streets

--Free Games for kids
--Free draws for adults and teens
--Displays by police and fire
--Food for nominal charge
--Kitchener Rangers street team (they bring a cage and participants can take a shot on net, throw a pass and test their pitching skills).

Get to know your neighbours, make new friends, share ideas about the neighbourhood.

For MAP to park click this link.
Posted by mhbpna at 9:57 AM No comments: Links to this post

FOR THEIR ANNUAL VICTORIA PARK CONCERT

AT THE BANDSHELL, ROOS ISLAND

(free admission ~ bring your own ground cushions or chairs for seating)
* * *
When the Kitchener Music Society Band was officially established in 1876, Britain’s Queen Victoria had been on the throne for nearly four decades and would continue as reigning monarch of the Commonwealth for another quarter century. In total, she ruled for 63 years and 7 months – from June 20, 1837 through January 22, 1901.

During the Victorian Era, outdoor band music was popular and abundant, ranging from regimental marching corps, to church parades, to public concerts attracting thousands into city parks on summer afternoons.

What better place to recreate the pleasures of live outdoor music today than the picturesque Roos Island bandshell in our own Victoria Park, with the famous statue of the Good Queen within listening distance?

On Monday May 24, starting at 12 Noon, the Kitchener Musical Society Band, led by conductor Dave Davidson, will entertain one and all with an hour of music which (in the words of an old-time poster) promises to be “…fit for Queen, Country, and Citizens of all ages…”
Posted by mhbpna at 10:59 AM No comments: Links to this post

On Wednesday, May 19th we will be conducting a special "one issue" meeting of the Neighbourhood Mobilization Alliance. We will have someone from the Ministry of the Environment present who can discuss what is being done with the former Electrohome building located at the corner of Duke and Shanley. This is a great opportunity to "get the facts" so we urge everyone in the area to attend. Volunteers have created posters and delivered them to houses and other locations.

The meeting is at Kitchener city hall in the Conestogo Room at 7 pm. 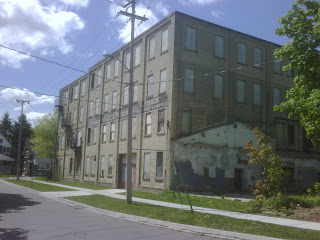 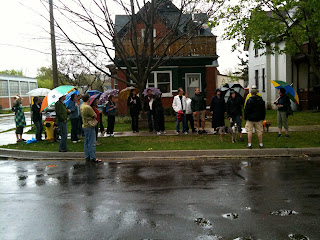 Thanks to everyone who came out last week for Jane's Walk -- Mount Hope Edition (2nd Annual!). We had from 20 to 25 folks throughout the walk despite the fact it rained for most of the morning. Some of us attended the Tannery District walk that same afternoon which was showered with sunlight.

I will add more of a writeup throughout this week with more pictures as well. It was great to meet old friends and make some new ones. Mary, Wayne, Ted and Joan took turns narrating parts of the walk and we had some others who provided a valuable historical perspective because they had grown up in the area many years ago.

Our area has many stories and a rich history.
Posted by mhbpna at 11:40 PM No comments: Links to this post