When the Region originally shared the plans for the Weber St. widening the MHBPNA discussed with them the problem of graffiti. They did not adjust their design and graffiti has been a problem for the area around Weber and Victoria. It has been cleaned up but only after we have brought it to their attention.  As of June 2016, this area is still the responsibility of the contractor.

In the past few weeks we have heard complaints about graffiti along the Spur Line trail. We walked the trail three weeks ago and were startled by the amount we discovered. We contacted several City of Kitchener and Regional politicians as well as Regional staff because we were unsure who was currently responsible for the trail. We sent them several photos we had taken so they could understand the severity of the problem. It took staff more than two weeks to respond so while we were waiting we arranged an appointment with Gloria McNeil  who is the Interim Director of By-Law for the City of Kitchener. She was happy to meet on the trail and walk along it for an inspection.

[A side note is warranted here because, Gloria has been a great help to our community for many years. The Neighbourhood Mobilization Alliance met for over 10 years to discuss with By-Law, Police and Fire issues in our MHBP area and Gloria attended some of those meetings and was always helpful. She has also responded to many of our complaints about 152 Shanley]. 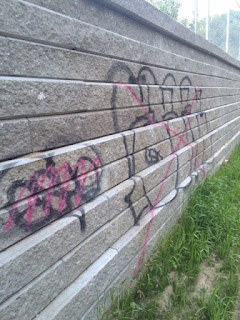 Gloria was startled by the state of the trail and it took her several emails and communications to find out who was responsible. We also received a detailed response from Peter Linn, the project manager for the Spur Line and Weber Widening from the Region around the same time.

It seems that the work is still not finished on the trail and the contractor has several issues to resolve. Ultimately the trail will be the responsibility of the cities of Kitchener and Waterloo (though most of it is in Kitchener). But for now the Region is still responsible and that is who ultimately cleaned it up. We were very happy with the speed at which the issue was resolved after the city of Kitchener became involved. 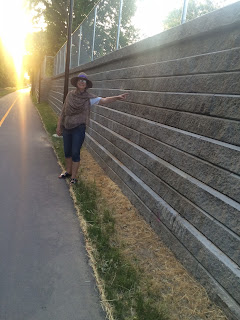 The Mt. Hope - Breithaupt Park Neighbourhood Association has also advocated for vines and other foliage to be planted along the walls of the trail as this is one of the best ways to discourage graffiti (the other way to discourage it is to report it and clean it quickly). The Region has already agreed to plant along the noise barrier walls along Weber St.
Posted by mhbpna at 9:36 PM No comments: Links to this post 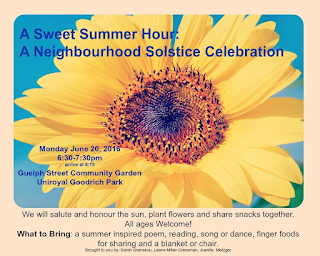 Posted by mhbpna at 9:41 AM No comments: Links to this post

On Wednesday June 1st, the MHBPNA had a unique opportunity to provide input to the City of Kitchener regarding the Margaret Ave Bike Lanes from a neighbourhood perspective.  We invited some members of our neighbourhood on a “ride along” Margaret Ave. and Union St.

You may remember back in 2012, the City announced that Margaret Avenue was going on a ‘diet’.  Their plan was to narrow the lanes, define the parking spots and bike lanes.  The first attempt at this was not well implemented.  There were a lot of jogs, and the lines were not painted smoothly.  When we complained the City agreed and we heard of a ‘shave and pave’* of Margaret Ave with new painted bike lanes.  Then the Margaret Ave Bridge crisis occurred and the construction was put on hold.  The City then painted the lanes to a new configuration that took into account some of the concerns of riders and residents. Unfortunately, again the lines were not painted well, the paint truck broke down and this led to a mess in some places that confused a lot of people.

One point we should make about road painting is that the lines degrade much more quickly than in the past.  The Government of Ontario no longer allows epoxy to be applied to roads so only water based paints can be used.  Water based paint wears much more quickly so no matter how you paint, it will wear off.  The option of thermoplast, where a plastic is melted to the road surface is available, but is very costly. This process is generally restricted to things like the bike icons on the streets.

Every now and then we touch base with the transportation department.  One of the questions asked was about the ‘shave and pave’*.  We were thrilled to learn that it would be happening this summer (2016).

The City of Kitchener was willing to meet with us on bikes to ride the lanes and talk about some of the issues we saw prior to any work being done.  This was a great opportunity to learn about their planning process and to get answers to questions about some of the other designs we see around the world.

The city was aware of many of these issues and we were pleased with their  responses to our questions. They had been over this route frequently on their bikes and wanted to make it better.

We learned that there will be some challenges around the pedestrian island at the Giant Tiger.  The city is planning to widen the road slightly (and cut into the existing boulevard) to allow the bike lanes to be wider through this area, one of the tightest areas on the route.  We also learned that the painting will be done by the contractor and that there will indeed be a redesign to ensure it is more comfortable to ride for all ages.

It was very interesting discussing the importance of cycling in our community with people that are on our side.  The City of Kitchener has many people who are committed to biking and the Cycling Master Plan is alive and well and being looked at constantly.  My suggestion?  Buy a bike.

* A ‘shave and pave’, refers to a process where a series of machines work inline to first shave the top layer of asphalt, crush it, heat it and repave the road.  The road will be a lot smoother for both bikes and cars.