On May 12, 2012, the Mount Hope - Breithaupt Park neighbourhood sponsored two Jane's walks and we counted approximately 60 people for each one! Last year we had around 40 people for the one walk and I think we can thank Terry Pender from The Record for this article he wrote advertising all four Jane's Walks in Kitchener over the weekend.

(There were no walks given in Waterloo this year so as a side note we will suggest "Hey Waterloo, step up next year and produce a couple of walks!")

Our first walk began at 10 am in the new parking lot across from the Breithaupt Block where Ted discussed the history of the area, from its agrarian roots to manufacturing (pianos, leather, rubber, buttons) and now into the current knowledge economy.

(Click on any of the images below for a larger picture) 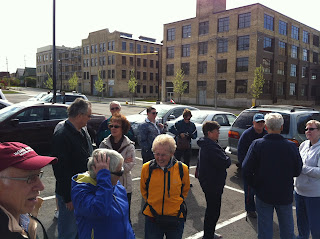 Then we walked to the Beohmer Box building which, unlike the Breithaupt Block, is not being renovated. But it is an active building which houses many interesting and eclectic tenants. In the picture below Wayne is discussing the old Fire Hall #2 which has been modestly renovated into studios and has dance classes on the main floor. 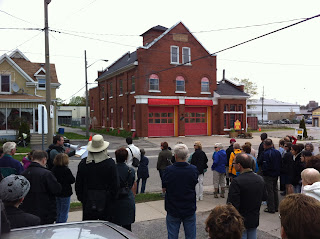 After discussing some more old buildings, including the former Electrohome building at Duke and Shanley, we all headed to Little City Farm. 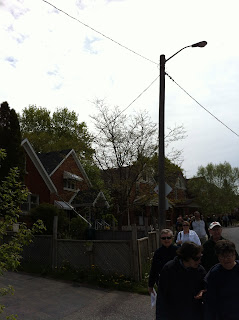 At Little City Farm Greg and Karin were great hosts. Greg explained their "back to the land inside the city" philosophy and Karin fed us bread baked in their outdoor oven. What an excellent end to a great Walk. Thanks to everyone who came out! 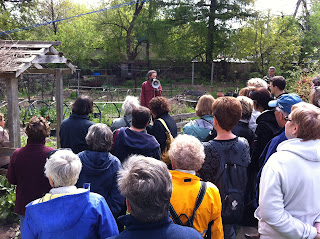 But that's not all! In the afternoon, Wayne hosted a walk in Mt. Hope cemetery. In past years, this has been part of our main walk, but there are so many stories to tell, it become a walk on its own. And about 60 people attended.

We initially met "under the angel": 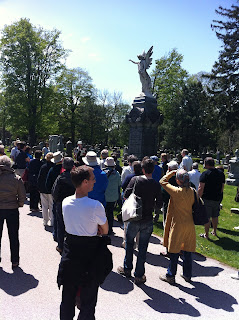 There are many great works of sculpture to observe in the cemetery when you wander through and take some time to observe: 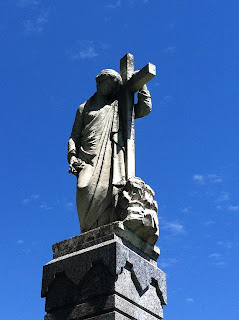 Many of the older headstones are deteriorating with time, acid rain and other weather. But that is part of life and evolution. 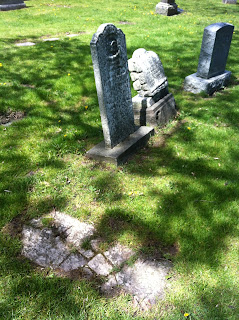 Wayne fascinated us with many great stories of early settlers, businessmen and former slaves who are all buried here. It is a great way to learn the history of Kitchener and many of the people who contributed to our rich culture.

Sometimes a man with a megaphone needs a helper! 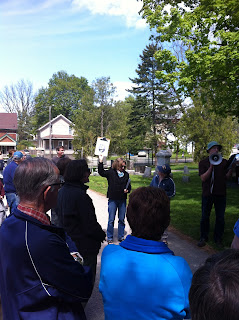 Thanks to everyone who came out. It is a real pleasure to help with these walks each year. This is our fourth year (!!!) and the Blog has pictures from all the others if you want to browse back in the archives.


Posted by mhbpna at 12:02 PM No comments: Links to this post

Animate, Meet Up, Bang a Gong on the Trail 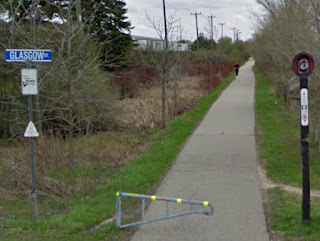 On May 27, 2012 Kitchener is hosting a "trail event" on the Iron Horse trail. Initially called "Animate the Trail" it seems to have evolved into "Meetup on the Trail" and is being held at the same time the Victoria Park folks are holding their 2nd annual Henry Sturm festival.


To view a poster for the event click here.


There will certainly be many things to celebrate and everyone is invited to take part of the trail and do pretty much whatever you want there.


It will be fun to walk the trail (which many of us do anyway) and see how many folks come out to this event. At some point we hope the organizers settle on a theme and name. This event started last year as a "car free" day. It was expensive to block off the road and impossible to make the many blocks between Kitchener and Waterloo very interesting and Kitchener council voted against spending any more money on it.


Relocating the event from the street to the trail is a great idea because the Iron Horse is already "car free". But with all the activity inside Victoria Park for the Henry Sturm festival, we will see how many folks venture away from that space and onto the trail itself.


Let's all come out and see what is happening on May 27th. Bring a gong to bang!

Posted by mhbpna at 10:24 AM No comments: Links to this post

Jane's Walk weekend has been a great success and the last event is scheduled for 1 pm today (Sunday, May 6) in the King and Ottawa area.

A full report will be published this week. But here is a photo from the cemetery walk (click on photo for larger image). 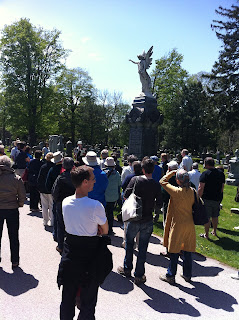 Posted by mhbpna at 11:41 AM No comments: Links to this post