The Condos are Coming!

The Condo development 1 Adam Street, which no longer has Adam street going through it, is now branded as Victoria Common. They have had a couple of public meetings where the community was invited and have recently been having open houses for real estate agents, brokers etc. They have an office on Louisa which will be open soon three days a week on Saturday, Sunday and Monday. 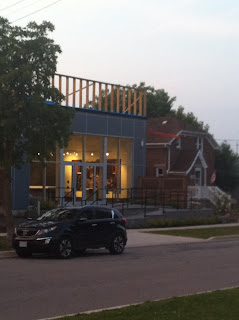 On Tuesday, June 19, there was a special event for invited groups and the MHBPNA Blogster was happy to attend. The organic Mill Street beer and gourmet pasta were fabulous! 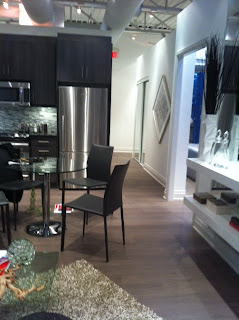 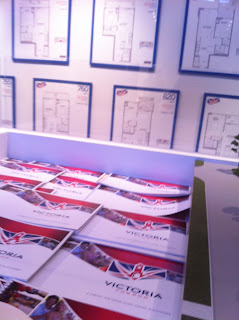 This will be one extremely large development with a combination of condos and town-homes, a large green area with many amenities for the owners and the surrounding residents. We have heard rumours about eventually a skating rink, karaoke bar, green space and more being built there! 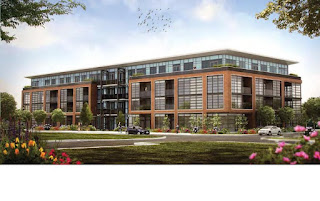 Most of the development in the MHBPNA area has been over on the west side: we have the Tannery, Pharmacy, Breithaupt Block and other development going in. This is the first large scale development on the eastern side and promises to be a very positive influence for increasing property value and putting Kitchener on the map for quality residential condos.

The real estate agent we talked with was very friendly and told us how the developer (Queensgate) had reached out to the local community and were committed to using local people for all phases of the project. The land used to have Breithaupt Tannery and Pannill Veneer on it. The buildings burned down and the land has been vacant for several years. It was fun for small scale mountain biking! 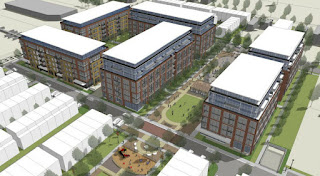 So many things about this development are positive. But it will certainly change the whole character of the surrounding neighbourhood. The MHBP area of Kitchener used to offer a great value for the first time home owner, but we have seen prices increase steadily over the past several years and this development will only contribute to further rises.

In Toronto the approval to develop condos is often tied to providing a certain number of affordable housing units, but not so in Kitchener/Waterloo. The LRT is spurring development and rising land prices along the King Street corridor, and this development will do the same further east. If you have $200,000 for a 640 square foot condo, then that is great. But if you would like to buy a half decent home for your family for under $250,000 you will have to look pretty hard (and probably somewhere outside of the MHBP neighbourhood).

So there are always different ways of looking at development. There are many positive elements to these plans and it is exciting that the value of downtown Kitchener is being realized. Our area is just not the "hidden bargain" it was a decade ago. 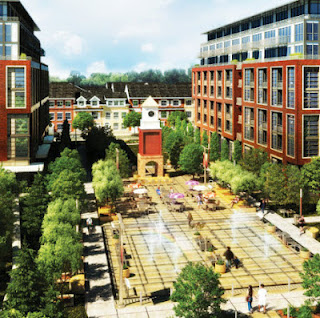 Posted by mhbpna at 5:07 PM 5 comments: Links to this post

From the Boathouse to the Box Factory

On Saturday, June 9, The Boathouse ventured into the Mt Hope - Breithaupt Park Neighbourhood. They put on a fund raising show in the Box Factory on Duke street. Musical hi-jinx ensued!

The MHBP Blog visited and took a few pictures of the "headlining" act, Sheesham, Lotus and Son. Banjo, Tuba and either fiddle or harmonica with a strange amplification device. What a venue, and what a crowd. We are going to be very excited when the Boathouse finally opens in July. OK, it is not in our neighbourhood, but it is a short walk in the summer! 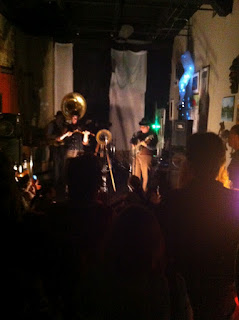 Posted by mhbpna at 2:28 PM No comments: Links to this post

Lippert Park Picnic 2012
Fun in the Sun- Rain or Shine

For the 10 years prior to last, the Lippert Family, Helen and Ken, and many of their relatives, have organized the annual George Lippert Park Neighbourhood Picnic.  After many years, and many good times, the Lipperts are passing along the torch.

I would like to cordially invite the Mt Hope/Breithaupt area residents to this years neighbourhood picnic.  Well perhaps less of a picnic, and more of a gathering with a tonne of fun things to do for all ages.  We’ll call it Fun in the Sun, Rain or Shine.

The date is July 14th from noon to 3 o’clock.  Join us for fun and games for the whole family, including face painting, family games, a family yoga session, crafts, and much more,….. and a special performance from Kitchener’s very own “The Skalywags”.  Check them out! http://www.theskalywags.com.

We want to continue the fun that has been had by so many children for so many years.  Come out and have some fun with the family, meet your neighbours, and learn about what is going in the neighbourhood.

If you are interesting in volunteering, or getting involved, please email Lane Burman at lippertpark2012@gmail.com.  The more help we can get, the more fun we can provide for the kids.

I am looking forward to a great turnout, and a lot of fun for all.


Here is a link to the Blog's story on the last Lippert Park Picnic!
Posted by mhbpna at 11:08 PM No comments: Links to this post

Photo from around our neighbourhood

Meg Leslie recently tiled the side of her house. This adds a nice bit of colour to the Duke St and Waterloo St corner.

Please send us your photos if you see something in our area you think is interesting! 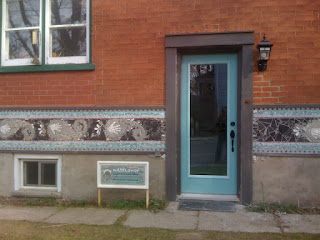 Posted by mhbpna at 11:09 AM No comments: Links to this post