Another weekend, another power outage 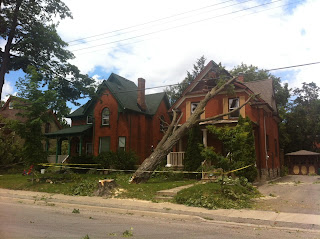 Last weekend our house on Duke Street West was without power for 48 hours and last night (Saturday) the power again went out. The city of Kitchener says "Meteorologist Rob Kutz from Environment Canada has determined that the storm was straight line wind from a down burst and not a tornado. The majority of the damage had been determined to be in the Strange/ Cherry street area. He is estimating winds at 100 KM/hr."

The above picture is taken around Wellington and Duke and most of the branches have been trimmed on this tree that smashed into the attic.

Here is a photo from a house next door to the one above: 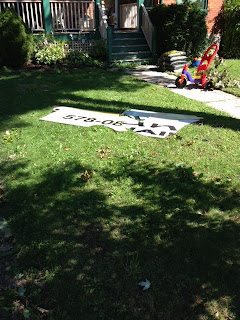 The sign on their lawn was blown all the way from the King's Crossing Plaza (Moore and King streets) into this front yard--about 4 blocks! The plaza suffered damage to the roof and workmen were nailing materials down as we are expecting another possible thunderstorm today.

On Sunday morning City of Kitchener posted to their Facebook wall:

"Storm has resulted in downed trees impacting wires, houses, cars and other property. This also resulted in power outages for approximately 6,800 homes.

Kitchener-Wilmont Hydro has been working at restoring power to all homes. As of 5 a.m. all but 1,200 homes had their power restored. KW Hydro hopes to have the remainder restored by 8 a.m. this morning. There are some locations where house service repairs are required and locations where branches are on lines. These will be addressed late Sunday evening. Please call KW Hydro at 519-745-4771 for more information."
Posted by mhbpna at 3:31 PM No comments: Links to this post 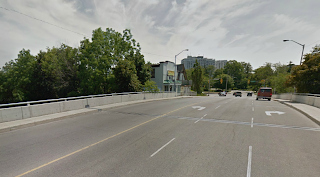 The bridge will remain closed until a decision is made based on the results of the feasibility study. Qualified inspectors continue to inspect the bridge three times a week in the interim.

Additionally, your Blog crew were listening to the local CBC station this morning and Barbara Robinson was quoted. She is the Director of Engineering for the City of Kitchener and believes the feasibility study will likely conclude the bridge will have to be torn down and rebuilt for a cost of around 5 million dollars.
Posted by mhbpna at 9:06 AM No comments: Links to this post 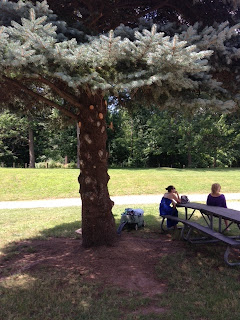 We have posted on the Blog about the Breithaupt Park rehabilitation effort. We appreciate the suggestions different people have made and the city has gone through them and has approved a few (they happen to be the suggestions that cost the least amount of funds).

In the picture above you see city workers have trimmed branches from a spruce tree and put a couple of picnic tables underneath. This allows families to use the park and have lunch or a snack in the shade. This did not cost very much and encourages use of this green space.

The city is also committed to clearing and marking the trails in Breithaupt Park so walkers and cyclists have a much better idea of where they can go.

Stay tuned as we show how other "inexpensive" ideas can make a difference.
Posted by mhbpna at 2:24 PM 1 comment: Links to this post 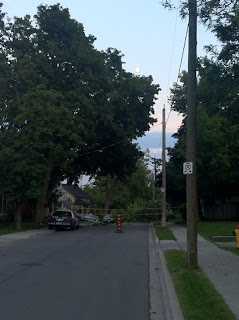 Here is an update on the storm cleanup provided by our councillor, Dan Glenn-Graham:

Calls coming into the City reporting downed City trees or tree debris are being entered into Cityworks for review by our Operations/Trees Supervisor, Kim Nihls, who is prioritizing these requests according to public safety.  Please keep in mind that we service City trees only, including those that have fallen onto private property.  Property owners are responsible for clearing their own trees. Private contractors can assist property owners who are unable to manage the debris themselves. If citizens are not sure if a fallen tree is a City tree, they can call the contact centre at 519-741-2345.


Kitchener-Wilmot Hydro has managed to restore power to all customers except those customers who require on-site service repairs, and those are expected to be restored today.  Please remember that City staff cannot remove tree debris if there are hydro wires caught in the trees.   Anyone reporting downed wires, trees or debris caught in wires should be directed to call Kitchener-Wilmot Hydro directly at 519-745-4771.


Yard waste collection in Kitchener is scheduled for the week of July 22-26 and Aug 5-9. Bundles should be less than three-feet in length and weigh less than 50 pounds. Residents can check the Region'’s website at  www.regionofwaterloo.ca for questions or call the call centre number at  519-883-5100.  Under no circumstances should our leaf collection drop-off sites be used to dump tree debris.


Contact Centre.  Please do not hesitate to transfer residents to the contact centre for more information on the status of the storm clean-up.  Or, if you have any questions or concerns not addressed in this e-mail they'’d be happy to assist.
Posted by mhbpna at 8:16 PM No comments: Links to this post

Soccer for kids, Thursday 5 - 6 pm in the summer

We received this poster from our friends at Extend-A-Family. Click on it to enlarge. 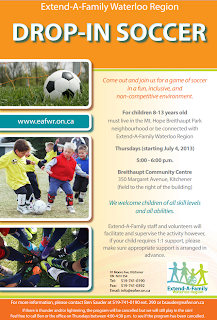 Posted by mhbpna at 4:55 PM No comments: Links to this post

Please come to our NMA meeting on Wednesday July 17th at 7pm in the Conestoga Room at City Hall.

The NMA (Neighbourhood Mobilization Alliance) is a group of people interested in our neighbourhood and what goes on in it. We have representatives from By-law Enforcement, Police Services, Fire Prevention attending and our Councillor, Dan Glenn-Graham, is often there as well.

At the July 17th meeting we will be providing an update on the old Electrohome Building at Shanley and Duke as well as many other issues in our area.

The NMA has been active for almost 15 years and has worked to get the support of our residents and city hall. The meeting is open and we encourage everyone to attend, even if you do not have a specific question or issue to discuss.


Posted by mhbpna at 3:37 PM No comments: Links to this post

A message from REEP Green Solutions:

REEP is offering free home consultations and workshops to help residents address water issues on their properties.
We invite you to take advantage of these services and help spread the word; details below and attached.

RAIN Home Visit with a Certified RAIN Guide
Get personalized advice about how to:

This is a limited time, free service for Kitchener and Waterloo residents.
Register online today.

Register to get practical tips from experts and the chance to do some work yourself.
No residential restrictions apply; anyone is welcome to attend.

See stormwater solutions in action during a tour with a Certified Energy Advisor – for free!
Visit REEP House for Sustainable Living, open Saturdays from 10 am – 2 pm
20 Mill Street (at Queen), Kitchener
Posted by mhbpna at 2:02 PM No comments: Links to this post

There was some graffiti sprayed this past week and the city has taken it down. We ask everyone to please avoid walking over the bridge because it is not safe. It looks fine, and just a few days ago we drove over it, but it has been closed because it could potentially collapse.  A news article reported that "A bridge with a similar design collapsed without warning in a suburb of Montreal in September 2006, killing five people."


Kitchener – On June 13, the city’s director of engineering ordered the closure of the Margaret Avenue bridge, based on recommendations in a preliminary report prepared by structural engineers at a local consulting firm. The final report, received June 26, recommended the bridge remain closed and the city proceed with an investigation of the feasibility of repairing or replacing the bridge.
The city owns 122 bridges which are routinely inspected every two years, in accordance with legislation.  Following the routine inspection of the Margaret Avenue bridge, a consulting firm was hired to conduct a further, detailed evaluation.  Given the significance of the recommendation, a peer review of the report was also ordered and the results are expected mid-July.
“Pedestrian and vehicular safety are paramount, and regular inspections are essential in helping us evaluate the state of all of our bridges,” said Barbara Robinson, Kitchener’s director of engineering.
Robinson noted that the Margaret Avenue bridge was built in 1959, and this specific bridge design is no longer used.
“The supports for this particular bridge design are no longer an acceptable option because, quite simply, there are limitations with them,” she explained.  “Essentially, this bridge could collapse without warning, so closing the bridge is the best - and the only - option.”  Robinson added that over the decades, the bridge has been properly inspected and maintained to legislated standards.
The city provided the railway with the final report and they will be doing their own risk assessment.  The Margaret Avenue bridge will remain closed to vehicles and pedestrians until further notice.
Posted by mhbpna at 10:53 AM No comments: Links to this post