On Saturday July 10th, from noon until three, Lippert Park was filled with neighbours large and small. Actually, the smaller neighbours edged out the larger ones by a two to one ratio. Ken and Helen Lippert have gotten together many volunteers to organize this event ten times now and we all appreciate the effort that goes into it.

There was a fire truck and, as we can see in this photo, a police car as well. 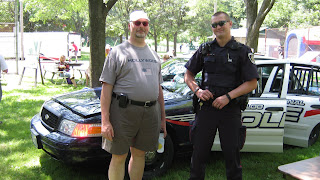 There were many games and prizes for the kids, a karaoke machine with DJ, portable skateboard park, burgers and hot dogs and drinks to purchase. Local city council candidates were there to meet their voters.

Several dozen people attended over the three hours and many put up pins on a map to show where they lived. There were also a few pins from outside the "hood".

As one attendee was heard to say, "I didn't realize there is so much in this park because you can't see a lot from the street". Indeed, there is a great community garden, new play equipment, a tennis court and benches upon which you can sit in the shade.

We appreciate the work everyone involved put into the organization and cleanup afterwards.

Here is a photo from the "candy toss" event. Kind of like Halloween in summer! 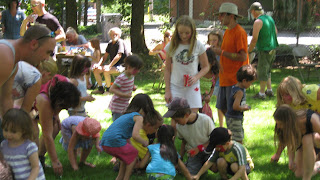