As followers of this Blog know, our Neighbourhood Association has talked with many people in our area about the proposed Pedestrian Refuge Island at Wilhelm and Weber streets. Almost everyone preferred a pedestrian activated light. Our executive met with regional staff who released a report on Friday, January 26, 2013 that favoured an island over a light. Their report takes our concerns into account only in that they proposed adding the infrastructure for a stop light in the future.

Today (January 29, 2013) Lane Burman and Ted Parkinson presented our Neighbourhood Association's response to this report to the Regional Municipality of Waterloo Planning and Works Committee. We intended to create a much longer written report because there were several problems with staff's logic and numbers. But we wanted to address this committee and explain our main points in person. We worked over the weekend with other members of the executive to produce our short presentation of our main arguments.

Ted Parkinson (MHBPNA Communications Director) discussed how we had been given conflicting information about the number of people crossing (initially staff said they had no numbers, then they said 40 crossed per day but did not give the study information, then they said 70 crossed in 24 hours; they stationed a car there in December when the temperature was 2C and rainy to do a traffic count). He mentioned the vision of our neighbourhood growth and how we were missing an opportunity to encourage pedestrian and bike traffic at an important intersection. The number of crossings will only grow when the rail trail ends there and people start walking from the Victoria Common development. This is an opportunity to think ahead and encourage pedestrian and bike exploration of our area.

Lane Burman (MHBPNA President) discussed school walking patterns and how are area is under-represented with stop lights. He discussed how several pedestrians had been hit by cars while at refuge islands and how we had been given many reasons for not having a light which were misleading. For example, we were told at one point it would cost $250,000 when it is much closer to $50,000. Lane also pointed out we have been given no accurate visual representation of what the island would look like (the diagram in their report is much narrower that we were told it would be). We included the photo below as part of our presentation to show how refuge islands are regularly damaged. 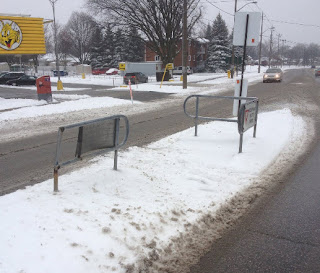 After our presentation we thought council would move on to other business but Mayor Zehr spoke and clarified that the cost of the currently proposed refuge island and infrastructure for a future light would be around $25,000 and the cost of the light would be $50,000. Other Councillors questioned our delegation about the location of Victoria Common, our experiences in the neighbourhood and they asked for supplementary information from staff.

Mayor Zehr eventually proposed striking the first two paragraphs of the report and changing it to recommend putting in a light now. Many councillors spoke in favour of this. Councillor Geoff Lorentz said "if you build it they will come" in response to staff's contention there was not enough traffic to warrant a light at this time. Councillor Rob Deutschmann was the only one who spoke against the proposal. He seemed to feel our association should have stood at the intersection for a few days and provided detailed crossing statistics. However, other councillors praised our delegation and said gathering statistics was not our job. There was a general feeling that the whole Weber Street Expansion has been about getting more cars through the city and that we needed to balance that with the rights of pedestrians.

After about 15 minutes of discussion it came to a vote and a Pedestrian Activated Light was approved! All councillors, except for Rob Deutschmann voted in favour.

This is a great victory for our neighbourhhood. We were expecting much more work ahead on this, and it was remarkable that councillors listened to our presentation and were swayed by it. We also believe all the letters, emails and phone calls of support by you residents made this happen as well. The councillors knew what the residents wanted.

Thank you for all your support and the MHBPNA sincerely thanks all the councillors who listened to us, spoke out for us and voted for a pedestrian light now.

Here is a link to the short article that appeared in the Record.

Here are some additional comments from people in our neighbourhood:

I have to say that the lack of that pedestrian crossing light was a significant detractor to buying a house on Wilhelm St. a few years ago. Nice house, good neighbours, but our young children were either attending, or going to attend, Elizabeth Ziegler school. Crossing at Wilhelm Street would have allowed us to meet up with friends and walk together to school.

We would have liked to be able to cross Weber Street safely, without having to go up to Guelph St., which would make the trip significantly longer. Not much difference to a car maybe, but significant to a pedestrian, especially young children with short legs.

Glad to hear that will be available for other people. Keep up the good work."

"Congratulations, Ted
I read your post and I appreciate the hard work and concern that you and Lane put into this.
I am thankful for your vigilance in keeping our neighbourhood people friendly.
Wayne"

"Congratulations and thank you for all your work on this"

We just wanted to send you a note of congratulations on getting the pedestrian crossing light at Wilhelm and Weber, your work has helped create a more walkable and accessible city! Thanks!

Thanks to some great neighbours for this letter to the Record.

You've got a letter in the Record this morning: http://www.therecord.com/opinion/letters/article/882655--pitch-wasn-t-cranky

Your delegation did a good job at helping councilors see the big picture beyond the strictly quantitative, rules-based approach staff takes. And that's why we have *elected* officials in charge.

Thanks for your feedback Chris!